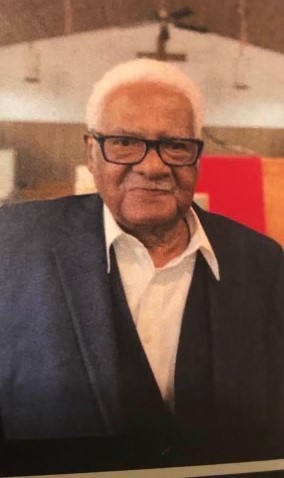 Born October 1st, 1927 in Chewton/Wampum Pennsylvania. The Son of Solomon & Cora Rhodes Johnson. His life was dedicated to his loving Wife Geraldine S. (Conkle) Johnson who were joined in matrimony on June 25th, 1950.

Eugene also served in the United States Airforce (CPL) during World War II. He was a Deacon at Tabernacle Baptist Church in Beaver Falls for many years. He served as a Foreman at Babcock & Wilcox in the Cold Draw Department until his retirement.

The family would especially like to thank Cambridge Village for their loving care of Eugene. Especially, Samantha, Tammy, Kim & ProMedica Hospice, Alyssa and Jean.

Thank you to Doctor Feldmeier and Nurses Sharon, Linda & Sue.

2nd Timothy 4:7   I have fought the fight, I have finished the race, I have kept the faith.

Eugene always ended his conversations with his family by saying “I love you big time”!

A homegoing service will be held on Friday at 11AM at the Tabernacle Baptist Church.  Friends will be received one hour prior to the service.

The GABAUER FUNERAL HOME & CREMATION SERVICES, INC., 1133 Penn Ave., New Brighton is honored to be of service to Eugene’s family during this time.

In lieu of flowers, memorial contributions in Eugene’s name may be made to Tabernacle Baptist Church Missions, 630 3rd Ave., Beaver Falls, PA 15010.