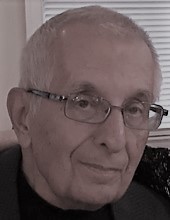 He is survived by his wife Isabel C. Navolio (Scarnato). John and Isabel spent over 62 years together having married on September 6, 1958, in St. Paul Roman Catholic Church, Butler PA. In a rarity for the day, they began their marriage living in France where John was deployed while serving in the United States Army. A highlight from his time in France was when he had the honor of marching for General De Gaulle during the Bastille Day celebrations during the summer of 1959.

John Navolio Jr. was born on June 3, 1935, in Ellwood City, Pennsylvania, the son of the late John Navolio Sr. and Stephanie (Meronski) Navolio. After serving in the US Army, he spent most of his life residing in Big Beaver, PA in a home he largely built himself. During his retirement years he moved to Waynesboro, PA residing there for 10 years, then Pawleys Island, SC and eventually Potomac, MD to be closer to his children and grandchildren. He was a graduate of Ellwood City High School, Class of 1953. He was an accomplished machinist at Babcock & Wilcox Company, retiring there in 1984 with over 30 years of service.

Over the years, John was very proud of the many accomplishments he witnessed of his children and his grandchildren. It was his greatest joy to watch them grow and become adept and gifted men and women.

In addition to his parents, John was preceded in death by his brother William Navolio of Butler, PA. and is survived by his brothers Robert and Michael.

John was an active member of Saint Rose of Lima Catholic Church in Darlington, PA where he served as a Eucharistic Minister and on various church committees for over 25 years. As an activist and a member of the Knights of Columbus, he spent over 35 years defending the rights of the unborn through his service within the Pro-Life NRLC organization. Rain, snow or shine, John led the Beaver County participation at the annual Pro-Life march in our nation’s capital every January 22nd. He served his country as a veteran of the United States Army. John served as a Lieutenant of the Big Beaver Falls Voluntary Fire Department and supported many of the Fire Department’s locally sponsored activities, including the Annual Spring Carnival, 20/20 Club Labor Day celebration, Saturday Night Bingo and Little League baseball. John was also an active member in the Local 1082 Steelworkers Union that hosted the annual Christmas Gift celebration (for the Union worker’s children) along with the Local 1082 sponsored Basketball Youth League.

John’s greatest passion was cars. Ever since the early 50’s, John developed a strong interest for everything automotive. He loved his sports cars having gone to scores of rallies and shows across western Pennsylvania. He also had a passion for drag racing with which he shared with his sons. He owned several sports cars over the years. And along with his sons, he loved to rehabilitate and then resell cars. John was his happiest whilst working on his cars. Of course, as a resident of western Pennsylvania, John was also an avid Pittsburgh Steelers fan sticking with them during the horrible 1960s as well as Bradshaw’s worst years through to six Super Bowl championships. John never missed a Steeler game. He also loved to take his grandson, Matthew, to Steeler training camp every Spring.

As a memorial, if desired, you can make a donation on his behalf to the Catholic Media Network, EWTN an organization he has had the privilege to visit many times and participate in or to ProLife.org.