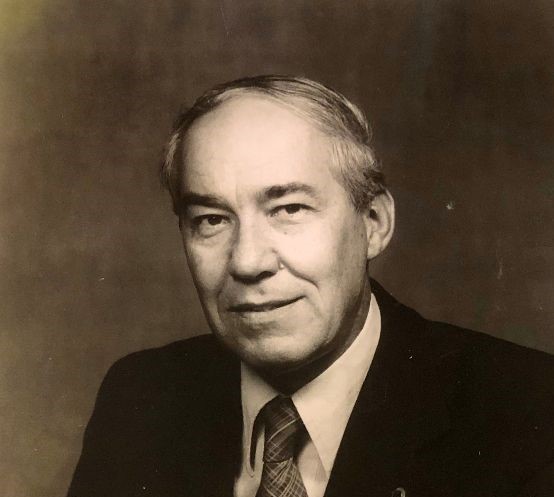 Joseph "Pap" Howard Griffith, Sr., long-time resident of Patterson Heights, died Wednesday, April 22, 2020 in his childhood home surrounded by his loving family. Prior to his death, he lived with his youngest daughter, Debra Jo Griffith, and his part-time puppy companion, Lily.

Mr. Griffith was employed for over 30 years by the Beaver Valley Motor Coach Company, starting as a bus operator in November 1942. He was an Aviation Ordinance man in the US Navy during World War II, after which he was employed by Shafer Coach Lines as a bus operator in the Aliquippa-Pittsburgh region. He returned to Beaver Valley in 1947 and was promoted to a management position in 1949. Briefly in 1956, he was employed as a bus operator with Continental Trailways, after which he returned to Beaver Valley until March of 1972. During this time, he advanced to the position of Vice President of Transportation and Maintenance, and was principally responsible for the planning and promotion of the popular Beaver Tours, all expense sight-seeing tours throughout the United States and Canada.

With the future of public transportation in Beaver County unpredictable, he left Beaver Valley in March of 1972, accepting a position with ATE Management and Service Co., based in Cincinnati, Ohio. His first assignment was to establish and manage a new transit system in Washington County (Hagerstown), Maryland, where he remained for 5 years. During those years he became a member of the Hagerstown Lion's Club; served on the County Economic Development Commission; and on the 1976 Bicentennial Celebration Committee. In April 1977, he was transferred to South Bend, Indiana, as Assistant General Manager of TRANSPO, the public transit system serving South Bend, Mishawaka, and Notre Dame. During his 10 year tenure, he oversaw the construction of off-street transfer facilities in both Mishawaka and South Bend business districts, rehabilitation of the bus maintenance facility, and the replacement of the fleet's 60 vehicles. As a member of the South Bend Lions Club, he served as president in 1982-83, and served on the Mayor's Traffic Safety Committee. In April 1987, MR. Griffith retired and returned to his former home on Patterson Heights, where he enjoyed creating woodcraft items for family, friends, and the church.

Mr. Griffith was a patron of Stratton's Barber Shop in Beaver Falls from April 1933 until recently, continuing to have his haircuts done by his friend, Robert Stratton, even during his years of residency in Hagerstown and South Bend. The only exceptions were during his time in the Navy when he received his haircuts free, as he liked to point out.

At Mr. Griffith's request, there will be no public visitation or memorial service. Interment will be in Sylvania Hills Memorial Park.

The family would like to thank Dr. Feldmeier (PCP), Dr. Daniels (urologist), Dr. Malkowski (cardiologist), the staff at Good Samaritan Hospice, and all the employees of the VA in Butler and Rochester for the many years of care they provided Mr. Griffith.