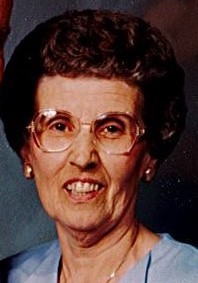 Born July 3, 1925 in New Brighton, she was the daughter of the late Steve and Verona Balog.

A 1943 graduate of New Brighton High School, Mary was employed at the former Home Protective Savings and Loan (now Wesbanco) in New Brighton for 15 years as a bookkeeper.  She was a member of the former St. Mary’s Catholic Church in Beaver Falls, now St. Monica’s Parish in Chippewa.  Mary was also a member of the Slovak Ladies Catholic Sokol Organization.  She was a loving wife, mother, and grandmother who enjoyed attending the events of her grandchildren during their school years, and proudly attended their graduations.  In her spare time, she enjoyed reading, doing word puzzles and playing bingo.

In addition to her parents, she was preceded in death by her husband of 59 years, Homer P. Benden (May 13, 2008), whom she married August 20, 1949; a brother and sister-in-law, John and Mildred Balog; 2 sisters and brothers-in-law, Ann and Bob Strobel and Betty Jane and Michael Dewhirst; and brothers-in-law and sisters-in-law, Regis and Eleanor Benden, Lyman and Mary Benden, John and Frieda Estermyer, Faber Benden, and Aloysius Benden.

Friends will be received on Thursday from 5pm-8pm in the GABAUER-LUTTON FUNERAL HOME-117 Blackhawk Rd. Chippewa Twp-www.gabauerfamilyfuneralhomes.com where prayers will be held on Friday at 9:30am followed by a mass of Christian burial at 10am at St. Monica’s- 116 Thorndale Dr. Beaver Falls PA 15010.  Fr. John Naugle will officiate.  Interment will follow in St. Mary’s Cemetery.

The family would like to thank the staff at Northview Estates in Ellwood City, especially nurse Marcie Holmes, as well as Kindred Hospice for all of their wonderful care.