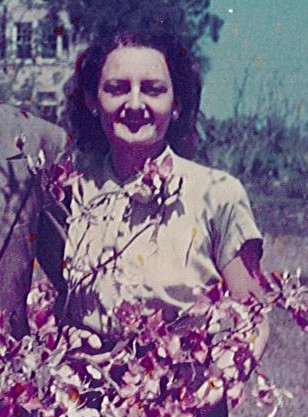 Susanna (Harmat) Mio was born March 1923 in Pecs, Hungary and died August 27, 2020 at home in Patterson Heights.  When she was little, she and her cousin would climb the big tree in front of her grandmother’s house and pretend they were sailing to America.  She was the daughter of Judge Jeno Harmat and Helen Kaltnecker Tapolczay and stepdaughter of Dr. Bela Tapolczay.  She graduated from business school and moved to North Hungary to be near her mother, stepfather and sister Judith in the village of Sirte.  She got a job as a bookkeeper at a bank in Ungvar not far away.

She met and married Gyula Speck, a graduate of law.  Her husband and stepfather were recruited into the Hungarian Army- Gyula to fight the Russians and Dr. Bela to ride the Red Cross train to pick up sick and wounded soldiers on the front.  The Russians were moving near their villages and Dr. Bela came with a horse and wagon.  They loaded a few things, buried the silver, left the bread in the oven, let the animals loose, and left their old life behind.  Even though the top of the train was clearly marked with a Red Cross, it was constantly being strafed by the American Air Force.  The towns they stopped in to pick up the wounded were often bombed and over run by Russian soldiers who shot the men and or shipped everyone to Siberia.  With a combination of street smarts and luck, Dr. Bela managed to talk the Russians out of killing him and the family several times.  On one occasion they were spared because the Russian General was the nephew of one of his patients in Budapest.  They passed through Dresden after it was firebombed; Judith said it was something you could not believe, and their train was the last to leave Vienna before it was overrun.

The family ended up in a United Nations displaced person camp in Munich.  She was selling tickets at the cafeteria when a Serbian officer, Dragisha Miodragovich (AKA Charlie Mio) brought her violets and said I love you.  After five years her family moved to Cleveland-Charlie was in Chicago; they found each other again.  She was divorced and they married in Florida.  He had just started working for Michael Baker Jr. Engineers and would become the supervisor of the mapping division.  She would get work as a practical nurse at Friendship Ridge.  She loved animals and enjoyed swimming, gardening, needlepoint, painting, and like to travel.  They went out West, and she returned to Hungary twice.  She missed her country very much.  She used to say “at least I did not have a boring life!”