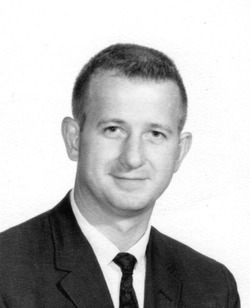 William A. Smith, 91, of Phoenixville, PA, formerly of Chippewa Twp., died Monday, April 25, 2016, at Spring Mill Senior Living. Born July 19, 1924, in Beaver Falls, he was the son of the late J. Howard and Georgia Smith. He was a veteran of World War II serving in the Philippines as a pilot in the United States Army Air Force. After the war, he completed his college education earning a teaching degree, and began his career at Chippewa Twp. Elementary School. He later became Principal of the Highland Suburban Jr. High, and in subsequent years he held the positions of Assistant Principal, Principal, Assistant Superintendent, Acting Superintendent and Curriculum Coordinator in the Beaver Falls School System. He retired in 1981 after 35 years of service. In addition to his parents, he was preceded in death by two wives, Estella M. Tusch Smith and Lila Veltri Smith, and a son, Michael W. Smith. He is survived by a son and daughter-in-law, Thomas D. and Nancy Smith and daughter-in-law, Deborah Smith, wife of Michael; five grandchildren and their spouses, Amber and Jay Leman, Aaron and Julia Smith, Joshua and Melissa Smith, Nathan and Teng Smith, and Tiah Smith, and five great-grandchildren, Maya, Cody, Shaun, Ariana and Sienna. He is also survived by two step-daughters from his second marriage, Luann Veltri Phillips and Lisa Veltri Walton. Friends will be received Thursday from 6 to 8 p.m. and Friday from 2 to 4 p.m. and 6 to 8 p.m. in the GABAUER-LUTTON FUNERAL HOME & CREMATION SERVICES, INC., 117 Blackhawk Road, Chippewa Twp., www.gabauerluttonfuneralhome.com, where a service will be held Saturday at 11 a.m. Pastor Daniel Callahan of the Steffin Hill Presbyterian Church will officiate. Entombment will follow in Beaver Falls Mausoleum.