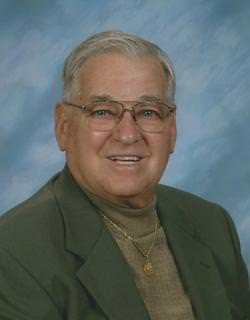 William “Dutch” Petti, 88, of Chippewa Township, died Friday, October 28, 2016 in Good Samaritan Hospice surrounded by his loving family.Born February 25, 1928 in Beaver Falls, he was the son of the late William Sr. and Blanche (Dana) Petti.Bill was employed for 42 years at Babcock and Wilcox Tubular Productions. He worked in the Hot Finish department as a millwright/foreman. Dutch was 17 years old when he enlisted in the US Navy where he proudly served his country as a 1st class seaman. Dutch’s infectious personality captured the attention of complete strangers. Everyone that he encountered left as a friend. He was so proud of his children and grandchildren and let everyone know that he had the “greatest family in the world”. He enjoyed sharing his childhood stories of growing up in Koppel, where he obtained his nickname, “The Flying Dutchmen.” Dutch was a loyal sports fan, with Notre Dame topping the list. He was an avid hunter and spent countless days at his beloved “camp” in Tionesta, PA. His summers were spent soaking up the sun in Myrtle Beach. Dutch was a member of the Chippewa Volunteer Fire Department, St Monica Parish, Beaver Falls Elks, American Legion, New Brighton Eagles, West Mayfield Vets, Harmony Hunt Club, LMBA Club, New Galilee, and IMBS Club, Koppel.In addition to his parents, he was preceded in death by his wife, Helen (Rudi) Petti; his brother, Robert Petti; and his sister, Marlene DeCaro.He is survived by his children, Robert L. (Betsy) Petti of Ellwood City, Joan (Greg) Tellish of Mt. Airy, MD, and Thomas (Dawn) Petti of Chippewa; eight grandchildren, Michael (Jordan) Petti, Joseph (Kelsey) Petti, Anthony Tellish, Daniele Tellish, Gregory (Jonna) Tellish, Tyler Petti, Christian Petti and Mia Petti; three great-grandchildren, Sage and June Petti and Conner Sullivan; and a special friend, Sue Gill.Friends will be received Saturday from 5-8pm and Sunday from 1-3pm and 5-8pm in the Gabauer-Lutton Funeral Home 117 Blackhawk Rd- Chippewawww.gabauerluttonfuneralhome.com where prayers will be held on Monday at 9:30am followed by a mass of Christian burial at 10:00am at St. Monica’s- Chippewa Site.Interment will follow in St. Mary’s Cemetery .Members of the Veteran’s honor guard will meet at the cemetery at 10:30am to conduct full military honors.Members of the Beaver Falls Elks- BPOE 328 will be conducting a service on Saturday at 7pm.The family requests that contributions be made in Bill’s name to BCCI Athletic Supporters, PO Box 1574 Beaver Falls, PA 15010 or Vietnam Veterans of America, Chapter 862, PO Box 26 Rochester, PA 15074.