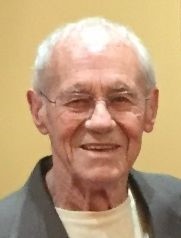 Glenn W. Guthrie, 90, of Big Beaver Boro, went to be with Jesus on Friday, January 22, 2021 at his residence, surrounded by his loving family.

Born August 5, 1930 in Brady’s Bend, PA, he was the son of the late Wesley and Helen V. (Holder) Guthrie. Glenn served in the United States Air Force during the Korean War. He worked as a locomotive engineer for P&LE (Pittsburgh and Lake Erie) Railroad. Glenn was a member of the Chippewa United Methodist Church, where he participated in the adult choir. He was a member of the Brotherhood of the Locomotive Engineers, the Beaver County Horseshoe League, and the Chippewa United Methodist bowling league.  Glenn was an avid card player, bowler, and horseshoe pitcher.  He enjoyed an occasional golf game. He loved most sports, but especially loved singing.  In the 1950’s he sang on a weekly radio show.  Most importantly, he was a man of faith that loved his family and Jesus.

In addition to his parents, he was preceded in death by 3 brothers, Clarence, Wayne and Wade Guthrie; and 1 sister, Mary Schwartzel.

Friends will be received on Monday from 2pm-4pm and 6pm-8pm in the Gabauer-Lutton Funeral Home – 117 Blackhawk Rd., Chippewa.  Glenn will lie in state on Tuesday from 10am until the time of service at 11am in the Chippewa United Methodist Church – 2545 Darlington Rd., Beaver Falls PA 15010.  Pastor Allan Brooks will officiate.

The family requests that contributions be made to the Parkinson’s Foundation of Western PA – 575 Lincoln Ave. Suite 101, Bellevue, PA 15202 or to the Chippewa United Methodist Church – Choir Fund.