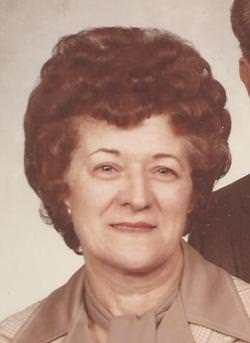 Josephine Theresa Scala Lawson, 95, of Koppel died Saturday, November 26, 2016 in Allegheny General Hospital after a short illness. Born January 3, 1921 in Chewton, she was the daughter of the late Anthony and Adeline (DiTommaso) Scala. Jo was a former member of Queen of Heaven church until its closing, was a current member of Holy Redeemer Church in Ellwood City, where she was a member of the Christian Mothers. During World War II she worked at Ellwood Tube, then went on to work for Shenango China, and then Gaylords and Jamesway. Her favorite past times included dancing, bowling, playing bingo, playing cards, and going to the Circle of Friends. In addition to her parents, she was preceded in death by her husband, William Russell Lawson in 2004; her son, William Lawson, Jr.; her son-in-law, Gary Clerici; three brothers; and five sisters. She is survived by her daughter, Adele Clerici of Chippewa; her son, Richard (Jill) Lawson of Koppel; two grandchildren, Melody Clerici of Chippewa and Heather (Todd) Mattlak of Erie; two great-grandchildren, Hayley and Madison; her sister, Dolores Dando of Chewton; her daughter-in-law, Patty Lawson of Erie; and several nieces and nephews. Friends will be received on Tuesday from 2-4pm and 6-8pm in the Gabauer-Matter Funeral Home 3500 Third Avenue, Koppel www.gabauermatterfuneralhome.com where prayers will be held on Wednesday at 10:50am followed by a Mass of Christian Burial at Holy Redeemer Church. Father Mark Thomas will officiate. Entombment will follow in Holy Redeemer Mausoleum. The family asks that contributions be made in Josephine’s name to a charity of your choice. Jo’s life revolved around her Catholic religion and her family. She prayed the rosary faithfully every day. She will be sadly missed, as she was the life of the party. You could always find her at an activity with her family or friends, and she was the driver for many of her friends.