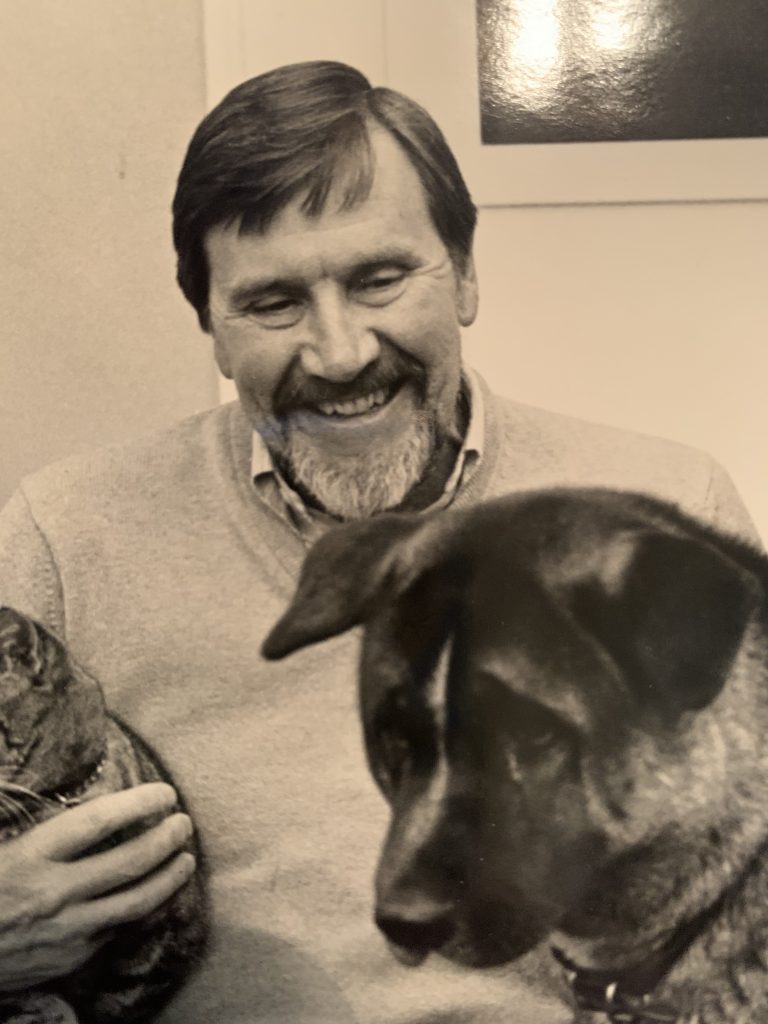 Neil W. Fisher, 92, of South Beaver Township, died peacefully in his sleep on the morning of Friday, June 3, 2022, comfortable in his own home and surrounded by his dear family and devoted animals.

Neil is survived by his loving partner of more than 35 years, Sydney (Chalfant) Reid; his three daughters, Brett Fisher, Shawn Fisher, and Kyle Fisher, mother of his grand-daughter Molly Morabito; his nephew and personal training coach, Noel Fisher; his nephew Erik Fisher; his nieces Kim (Fisher) Smith, Lisa (Fisher) Goin, and Kirsten (Fisher) Porter; his faithful, always hungry dog, Theo; and his four cats, Wilson and Zipper, plus tabbies Truman and Lily, who curled at his side as he took his last breaths in the company of his loved ones.

Born May 19, 1930 in Lorraine, Ohio, he was the son of the late Willard and Virginia “Happy” (Sapp) Fisher, dividing his childhood years between the Sapp family homestead in Kent, Ohio, and his parents’ home in Ingram, Pa. Neil was preceded in death by his brother, Noel Fisher, and his ex-wife Glenna Montgomery (Fisher) with whom he raised three daughters in Moon Township, Pa.

Neil was a two-year Army Artillery veteran who entered OCS at Fort Hood, Tx., at the same time that Army Private Elvis Presley arrived for boot camp. Neil said there would be cars lining the dusty road outside the camp every day, filled with dressed-up young ladies hoping to catch a glimpse of the famous man who was, according to Neil, busy just keeping his head down and trying to be like everyone else.

He earned a bachelor’s degree at Washington & Jefferson College and built an accomplished career as a writer and creative director for Pittsburgh-based ad agency Ketchum, MacLeod & Grove before spinning off his own ad agency, Fisher & Smith, Inc. Neil’s writing and creativity was also reflected in his TV career, writing for ABC Sports’ “The Winners” special including O.J. Simpson and Franco Harris, as well as writing for movie director George Romero and making a cameo in Romero’s, “Season of the Witch.”

Thirty-plus years ago, Neil and Sydney bought their country home and horse farm in South Beaver Township and have built a beautiful and bountiful life together, filled with friends, laughter, horseback riding, glorious gardens, good times, hard work, helpful neighbors, and the joy of seeing their dreams together realized.

Neil loved his animals – cats, dogs, and all the wild creatures – but especially horses. He was a horseman who befriended each of his mounts, roamed the local trails, and traveled overseas to ride the Irish Hunt. He did it for the thrill but also for the love of the animals.
Neil’s friends will remember him as a spellbinding storyteller, who could make you laugh or sigh, but always think. He was a restauranteur, a bon vivant, the life of every party. Yet behind his wit and exuberance was compassion and wisdom. People say how he helped them with advice or by letting them see more in themselves. Mascot of the “Girl Gang,” builder of fish ponds, word connoisseur, mentor to so many, master of the unforgettable phrase, Neil fell in love with this place, this community—and his community has returned that love.

Neil wrote many words of wisdom to his daughters over the years. Here are a few lines from the man himself to guide us through this time of missing him:

“Life and death are viewed as too final. It is more reasonable to think of it as merely up and down, or on and off. More like the waves on the shore. Waves don’t die. They run upon the sands and disappear, only to be followed by another and another. Who mourns a wave?”

The family gives special thanks to the staff of Vitas Hospice for their exceptional kindness and care for Neil and for the guidance they gave the family as they cared for him at home.

Following Neil’s wishes, there will be no viewing or services, but all who knew him are encouraged to remember his words, wit, and wisdom and to carry them forward.

Those who wish to salute Neil’s legacy may consider a reflective glug of good Scotch whiskey, a quiet contemplation of the glories of Nature, or a donation to the Humane Society of Beaver County.

There will be a private memorial picnic held for family, close friends, and neighbors later in July.